I’ve ate so much beans and rice lately that I’m starting to go crazy. I wanted something different for dinner, and went through my cookbooks looking for something I could make with the few ingredients I actually have on hand right now. In Sarah Kramer’s La Dolce Vegan, there is a recipe for basic instant gluten, which is like a super-easy seitan. The only two ingredients are equal parts vital wheat gluten and water. You then take the resulting dough and use for one of her mock meats (such as sausage, fish, ham, etc). 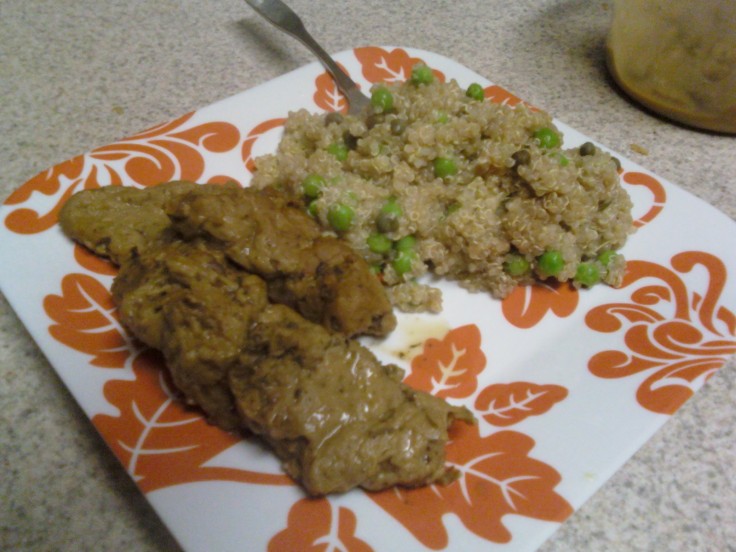 I was pretty suspicious at first because the dough was pretty watery. Also, it looked like such a small amount given the recipe says it makes enough for “2 large or 4 small servings.”

The faux chicken broth looked pretty good, so I put the ingredients together. Although the seitan dough is super simple, it is the broths that make these recipes. The chicken recipe was a combo of herbs like sage, thyme, and celery seed with some other ingredients. I actually tasted the broth before adding the seitan, and was impressed with how tasty it was considering its simplicity.

It took about an hour to cook. Unlike other seitan I make, you cook this until the dough absorbs all the liquid. I shouldn’t have been worried that it wouldn’t make enough for 2 servings – the seitan absorbed the liquid and expanded considerably.

Best of all, it was really good. The recipe suggests baking it for 30 minutes to give it a chewier texture, but I didn’t feel like turning the oven on, so just ate it as is. I cooked some quinoa with peas, capers, nutritional yeast, rosemary, and balsamic vinegar to go with it.

So thumbs up to Sarah Kramer’s recipe. Next I’m going to try the faux ham recipe.

2 thoughts on ““Chicken” Seitan and Quinoa”