A Roundup of Forgotten Food

I’ve been pretty slack about posting lately. For that, I’m sorry. No good excuse, except that I’m lazy and I had a pretty fabulous weekend with people I’ve missed. Thursday a friend I’ve known since Kindergarten and who I hadn’t seen in a very long time was in town, and we hung out with our mutual friend who has also been around since we were five. I got to spend Friday with the BF and his awesome sister, and then Saturday I saw my favorite band at an Earth Day celebration with a very missed friend from my previous university.

So, with this post, I just want to tell you about the food I’ve been eating recently. And I’ll start with what might be the best – the fettucine alfredo from Vegan with a Vengeance.

I’m cheap, so I subbed almonds for the pine nuts, which resulted in a darker color, but I have to say something… this sauce is incredible! It’s uber creamy, thick, and tasty. I ate it with the balsamic Portobello from the same book, and a side of green peas (white sauce always means green peas).

My boyfriend recently bought a dutch oven, and some day soon we’re planning to make a hazelnut crusted cobbler in it. I had a whole bag of hazelnuts in my freezer that I had gotten from Trader Joe’s, so I decided I would attempt to roast and peel them. I learned something. I hate peeling hazelnuts. Or, I hate trying to peel hazelnuts. If anyone has any tips they’d like to share, I’d more than appreciate it. I ended up with 1 cup peeled and 1 cup unpeeled, which took me about an hour to do.

Ugh, it was such a chore.

Anyway, I’ve had two pie pumpkins on my dresser since later October. They finally got what was coming to them when I made the pumpkin baked ziti with carmalized onions and sage crumb topping from Veganomicon. I don’t have any decent photos to share, although I do have one bad one: 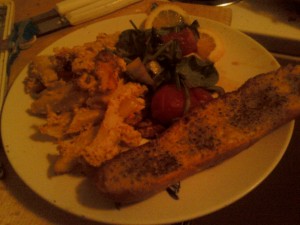 I loved how creamy it was, although my boyfriend thought the crumb topping was too sage-y (I disagreed, but then again, I love sage). We made some garlic bread, and sautéed spinach and tomatoes. The spinach and tomatoes were so good I’ll probably make them at least once a week from here on out. So easy, fast, and healthy.

Lastly (I think…), I tried to make another bowl of mac n’ cheese using Wayfare’s We Can’t Say It’s Cheese. 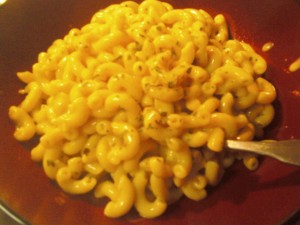 I used more cheese, added some miso (because why not?), and threw in some dried basil. Much better.

Right now I’m baking some pineapple cupcakes, so stay tuned for my next post 😉