Meals For My Busy Days

Whew! We’re nearing the end of our busy season at work, and as of January I’ll have way more time off, and much more time in the kitchen. I’m looking forward to having more chances for experimentation.

Here’s a few pics from some of my recent meals. I’ve been cooking mainly large pots of food, so that I can feed myself and still have plenty left over to take to work. One of my favorites so far has been the Home-Style Veggie Noodle Soup from Julie Hasson’s Vegan Diner.

It’s hearty, comforting, and delicious. The only variations to the recipe I made were to sweat the vegetables before starting the soup, and adding vegan Worcestershire sauce along with the tvp granules.

I also made the Cheezy Mac from Vegan Diner, and added some kale into it. 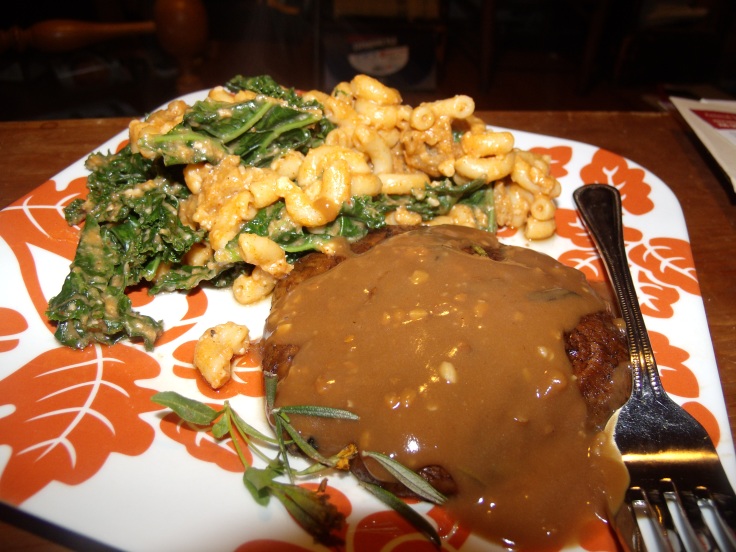 The cashew based sauce was creamy and smooth (I soaked the cashews for approximately 6 hours because I had to use my food processor – if you have a high-powered blender that would be unnecessary). I ate the pasta alongside a roasted portobello with pan-sauce gravy. I’ve been addicted to making pan sauces lately, and will show you how in an upcoming post!

Around Thanksgiving I found myself craving a dish I actually despised as a child: green bean casserole. I didn’t know exactly how to make it since I constantly ridiculed it and considered it disgusting as a kid, so I used the recipe from C’est la Vegan. It came out amazing and paired great with mashed potatoes with basil and buttered corn.

So those are just a few examples of what I’ve been enjoying. Coming up: a giveaway (the first on Ahimsa!), a vegan seafood party, pan sauces, and a lot of Asian vegan cooking!

2 thoughts on “Meals For My Busy Days”