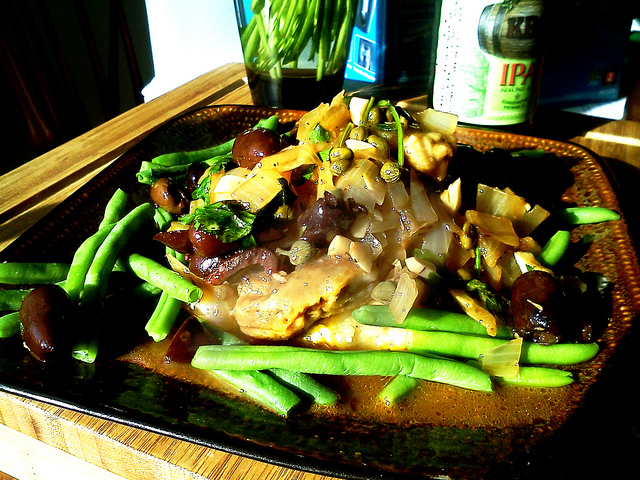 When my 2+ year relationship ended a couple of months ago and I was forced to get used to single life again, I realized that I had acquired the bad habit of spoiling other people while forgetting to treat myself. I would cook lavish meals for my ex and I to share, but whenever I had to feed only myself, I would basically eat whatever shitty food I could whip up quickly. I would put so much effort into impressing or taking care of people I loved, but I never gave myself a second thought. I have no qualms about admitting that I come first these days – I think it’s incredibly important to be mindful of your own happiness before you even consider trying to make someone else happy.

An example of this newfound wisdom of mine is the seitan piccata I made for dinner last night. In the old days I would have saved this fancy dish for a date night or for feeding friends, but treating myself with this delicious dinner for one lifted my mood and satisfied me to my core. The recipe is from Veganomicon, and although not at all difficult to make, it is time-consuming, especially if you don’t have any seitan already made.

Piccata is basically just a way of preparing a protein by lightly breading and frying it, and then topping it with a sauce of lemon, fat (traditionally butter, but in this case extra virgin olive oil), and parsley. Since Isa and Terry are kitchen geniuses, they added wonderfully salty capers and kalamata olives to the recipe.

Although mashed potatoes as the base of this dish sounded delish, I had no potatoes on hand. Instead, I made creamy polenta seasoned lightly with garlic salt and olive oil. The green beans were frozen, thawed and boiled. Like I mentioned above, it’s actually a really easy recipe to make, there’s just a lot to do at the same time (unless you have time to make some of the components ahead of time).

I really enjoyed this piccata. The combination of flavors and textures were really satisfying, and it was also very filling. Cooking something fancy for myself turned a casual Tuesday night dinner into something special.

What are your favorite ways to treat yourself?

One thought on “Seitan Piccata”