Rosemary-Mustard Sausage and a Veggie Burger 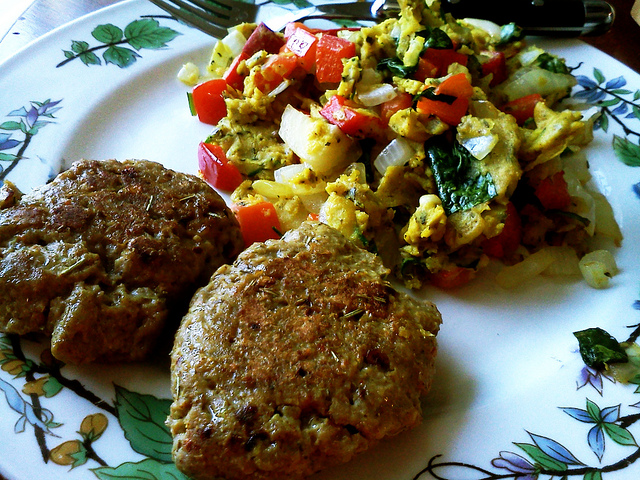 I woke up feeling sluggish yesterday, so I wanted a hearty breakfast. I made Ricki’s chickpea flour scramble, which reminds me of eggs even more than a tofu scramble. I’ve tried the recipe once before, but I ended up burning the chickpea flour. This time I kept the heat on medium-low and it cooked perfectly. I didn’t have tahini so I left that ingredient out, and the texture and flavor were still fine. I also added spinach, fresh chives, and a little black salt.

The sausage was delicious. I had a coupon for Gimme Lean Sausage, so I had bought some, but I wanted to do something more exciting with it than the usual light frying. I added some Dijon mustard and spices to it, and it turned out great.

In a frying pan over medium-high heat, heat the vegetable oil. In a bowl, mix all the ingredients together. Mash together with a fork, and once everything is well-incorporated, shape into four equal-sized patties.

Once the oil is hot, fry the patties for 2-3 minutes per side, until browned. Serve. 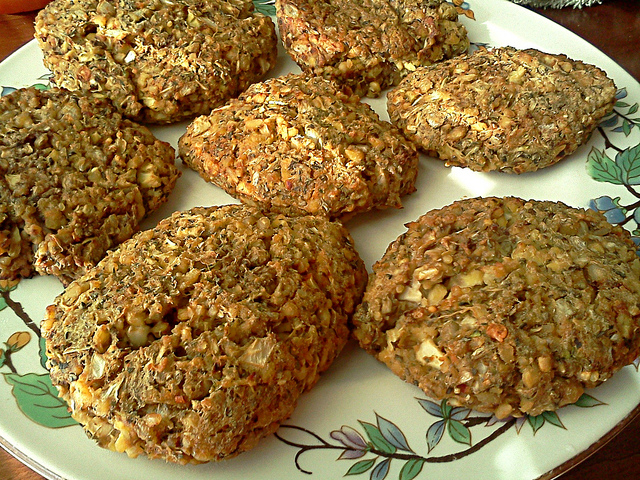 I also made these awesome gluten-free veggie burgers for dinner last night. The recipe is from Meghan Telpner’s Making Love in the Kitchen, which is a blog I’ve recently fallen in love with. There’s a lot of great information and recipes for healthy eating.

Most of the veggie burgers I’ve made in the past were bean or vital wheat gluten based, but these ones were made of tempeh and veggies, including broccoli stalk! (I’m always searching for a great way to use those up.) I used chickpea flour rather than spelt or  brown rice because it was the only gluten-free flour I had on hand, but you couldn’t taste the flour anyway. I also added some chipotle powder and red chili flakes to give it a nice kick.

I had no idea that chia seeds would be such a great binder! These burgers held together better than many I’ve made in the past. 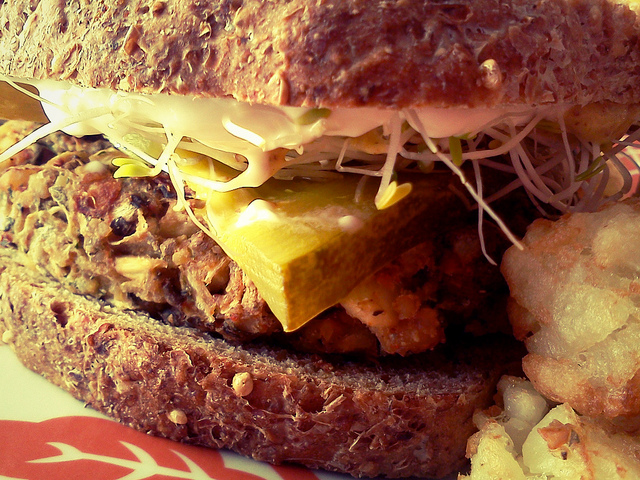 I served my burger on sprouted Ezekiel bread (not gluten-free, I know, but it was all I had) with Vegenaise, dill pickle, spicy brown mustard, and alfalfa sprouts. And of course, I had tater tots on the side. 🙂

Oh, and taking a break from food talk, republican representative Steve King of Iowa, said this during a meeting of the House Agriculture Committee:

I’m here to tell you I’m a committed carnivore. I like meat. I sit on the Ag Committee and we had a hearing before the Ag Committee when we invited in the president of the Humane Society of the United States, HSUS, President Wayne Pacelle. And we had one or two other witnesses from the anti-meat crowd or anti-animal husbandry crowd. PETA was there and one other animal activist group. So we just asked them, under oath, “are you a vegetarian?” And they confessed they were vegetarians, all of them. Well there they are with an agenda for our diets.

Um, really?  Vegetarians and vegans don’t have to “confess,” we usually make our diets well-known. And sure, treating animals in factory farms better and getting Americans eating healthier might be an agenda, but it’s a hell of a lot better than the agendas of Big Ag.

2 thoughts on “Rosemary-Mustard Sausage and a Veggie Burger”